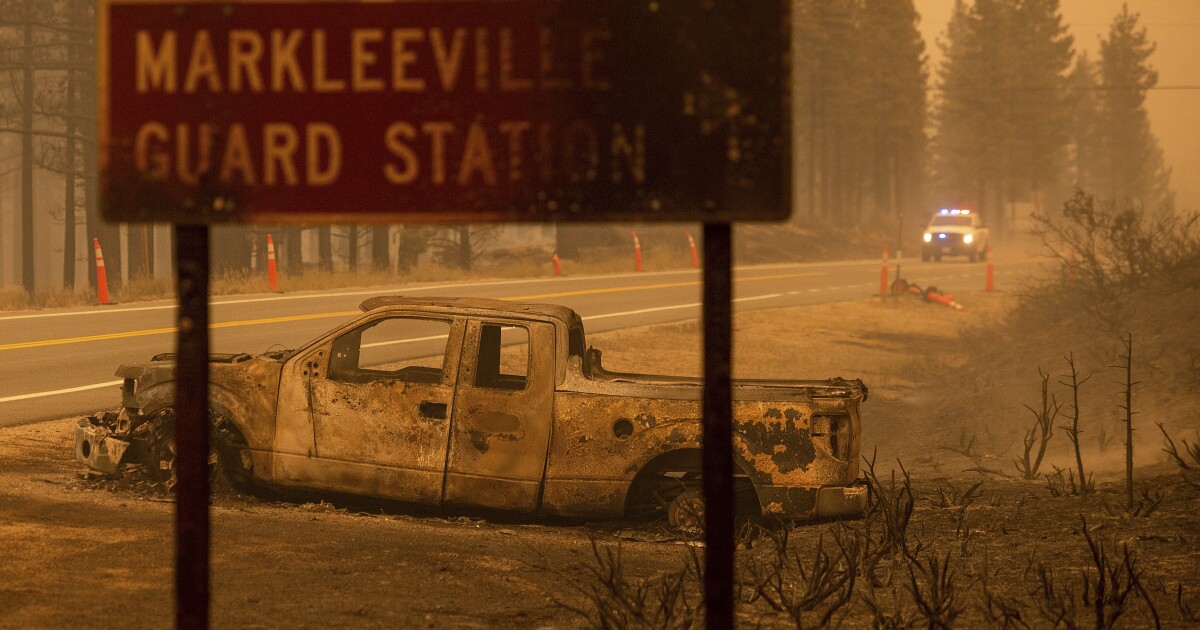 One of the state’s largest wildfires has taken a turn toward destruction.

The Dixie fire, burning in Butte and Plumas counties, has grown to 85,479 acres with 15% containment, the California Department of Forestry and Fire Protection said Wednesday — and burned at least two structures.

It is the first time the fire has destroyed structures since its July 14 ignition.

Cal Fire did not provide details about what types of structures were felled by the flames. A least 800 other buildings are threatened, the agency said.

Officials said the blaze was moving away from the town of Paradise, which was ravaged by the 2018 Camp fire, and toward Lake Almanor, where there are additional homes and cabins.

The Dixie fire has grown with such velocity that it has created its own weather, including a massive pyrocumulonimbus cloud that generated its own lightning. During an incident update Tuesday evening, Cal Fire operations chief Tony Brownwell said the fire remains highly active amid the bone-dry landscape.

“The fuel component right now is so dry, so almost 100% of the sparks going out find a receptive fuel and are lighting up,” he said. “That’s indicative of our continuous drought.”

More than 1,000 additional personnel arrived Wednesday to help fight the flames, said Rick Carhart, a spokesman for Cal Fire’s Butte County unit. The additions bring the size of the crew to more than 3,300. Officials hope the bolstered numbers will help turn the tide against the stubborn fire.

“We’re sort of flooding the area with firefighters,” Carhart said. “It’s really going to help to be able to get more done and to be able to cover a bigger area.”

Carhart said crews are still dealing with gusty wind conditions, which are creating extreme fire behavior that can force firefighters to back off.

It’s now a matter of “watching the weather and keeping that situational awareness so they can get in and get the most work done that they can,” he said.

But California’s fatigued firefighters were also up against the growing Tamarack fire in Humboldt-Toiyabe National Forest, near the Nevada state border, and a new blaze in Yuba County that ignited Tuesday afternoon.

An estimated 800 homes are now threatened by the fire, LeClair said, noting that crews were prioritizing the blaze’s north and eastern perimeters in an attempt to keep flames from crossing highways.

But on Wednesday morning, video showed the fire appearing to jump Highway 89.

In response to the swelling flames, the Douglas County Sheriff’s Office in Nevada issued voluntary evacuations for the Leviathan and Holbrook Junction areas. On the California side, the Markleeville, Woodford and Mesa Vista areas remain under mandatory evacuation orders, officials said.

The California Department of Transportation also closed State Highway 88 from Picketts Junction to the Nevada state line because of the fire.

A smoke specialist has been brought in to assist with air quality monitoring, LeClair said, which continues to hover in the unhealthy range in Markleeville and nearby areas.

Smoke plumes from the Western blazes have grown so strong that they are now delivering haze as far as the East Coast.

It grew to about 70 acres and ignited a 20-acre spot fire nearby, and crews worked overnight to extinguish the flames.

By Wednesday morning, the Frenchtown fire was 75% contained, Cal Fire said, and forward progress had been stopped.

“The incident commander saw the potential for this fire as soon as we got the spot,” said Mary Eldridge, a spokeswoman for Cal Fire’s Nevada-Yuba-Placer unit, noting that local teams moved in immediately and were able to prevent a massive spread.

“They did a lot of work overnight, and they were able to really put a good stop to it,” she said.

Despite the progress, at least one structure was damaged during the fire’s run, Eldridge said.

And even as the smoke clears and the flames dissipate, California’s firefighters must remain on high alert: Wildfires across the state have consumed more than 273,000 acres this year, Cal Fire said, and at least five major fires remain active.