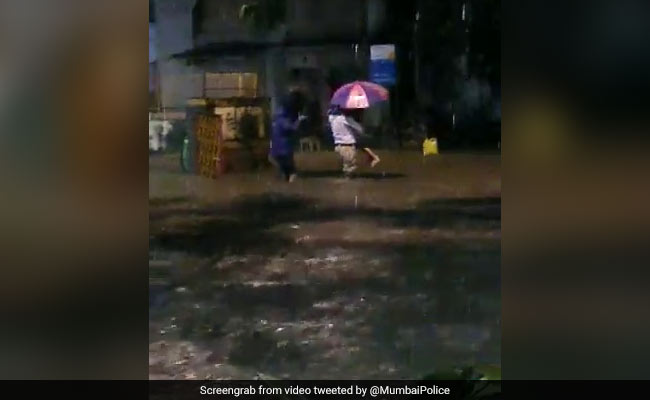 Heavy rain lashed Mumbai and adjoining areas over the weekend, leading to inundated roads, suspension of local trains and damage to property. With red alert being sounded in parts of the city, people have been explicitly advised not to move out in the open. But for those who have been left stranded by the rain, it is Mumbai Police to the rescue. The department shared a video on the intervening night between Sunday and Monday, in which a police officer can be seen guiding a man and his daughter through an inundated road as heavy rain continues to lash.

The Mumbai Police said that the man was injured and was with his daughter on the heavily flooded road at the Kandivali traffic chowk when Police Naik Rajendra Shegar came to their aid. The video was shared on the official accounts of the police department on Instagram as well as Twitter.

The caption accompanying the video read, “You Can Count On Us! Police Naik Rajendra Shegar, deployed at Kandivali Traffic Chowki, helping an injured dad and his daughter reach to safety.”

Reacting to the video on Instagram, one user, who goes by the name Sonewad Rukmini, said, “Salute to Mumbai police.”

Echoing the emotion, another user with the handle Shiv7981 wrote, “Risking their lives for public service! What a great police force! An example for all of mankind since their establishment.”

Several others thanked the police force for their contribution to keeping citizens safe in such trying times and flooded the comment section with heart emojis.

On Twitter, the video has received over 34,200 “views” in less than 12 hours of uploading.

You Can Count On Us!

A Kandivali Cop helping an injured dad and his daughter reach to safety.#AamhiDutyVarAhotpic.twitter.com/aiHrLrTRGG

Responding to the video on the micro-blogging platform, one user said, “Salute him…”

Salute him.. Thank u mumbai maharashtra police.. we know u r always there for us.. we sleep calm because we know u r there. Thank u so much for everything and ur sacrifices ????????

Another user thanked the police force for “always being there” for the citizens.

Quote-tweeting the video, one viewer wrote, “We need to applaud our policemen more & more often…”

We need to applaud our Policemen more & more often. They’ve been doing a stellar job, not just this pandemic….but overall
Thank you ???????? https://t.co/IMnHKCL88l

Here are some other reactions:

As always, bailing us out. https://t.co/zviefrJ9Qs

So far, rain has claimed 20 lives in Mumbai’s Chembur and Vikhroli areas, according to the Brihanmumbai Municipal Corporation, the city’s civic body.

Tell us what you think of the video and the policeman’s gesture.