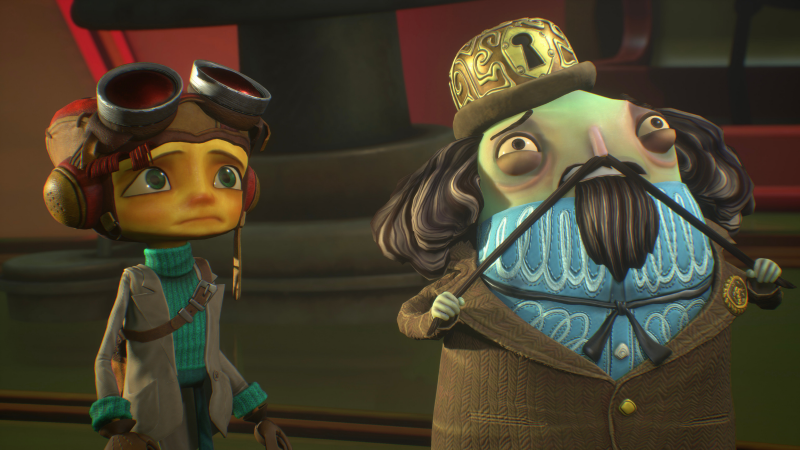 
Psychonauts 2 moves at a mile a minute. At every turn, the game throws something new and unexpected your way, to warp your perception of both the game’s universe and your understanding of its mechanics; it constantly moves between different ideas, level designs, and gimmicks. And while we only played for few hours during a recent hands-on preview event, we’re hopeful the rest of the package maintains this pace – even if the game doesn’t always feel as tight as we want it to.

Saying we “only” had a few hours does a disservice to the plethora of stuff we saw in Psychonauts 2. After playing through four different levels of the game, we were able to see a variety of the story, characters, and different gameplay concepts.

Firstly, we checked out the game’s opening. Psychonauts 2 picks up right after the events of the first Psychonauts, released in 2005, as well as the events of the VR exclusive Psychonauts in the Rhombus of Ruin, released in 2017. After saving Truman Zannato, the head of the Psychonauts, from the evil Dr. Lobatto, Razputin “Raz” Aquatto has the chance to live out his dream: joining the ranks of this psychic organization tasked with maintaining world peace. His first mission: infiltrating Lobatto’s mind and figure out who the villain might’ve been working with.

A dentist by trade, Lobatto’s mind is teeth-themed – and it’s truly horrific. Teeth and gums are everywhere as you work your way through the level’s various platforming sections, being introduced to the game’s cast of characters. This opening level also serves as the Psychonauts’s tutorial, acclimating you to the controls and powers before it truly lets you loose.

After working their way through Lobatto’s brain, the Psychonauts deduce they have a mole within their ranks. Their next mission is to identify and stop said mole. Arriving at The Motherlobe, the Psychonauts’ headquarters, Raz is introduced to Hollis Forsythe, the second in command of the Psychonauts. Forsythe isn’t impressed with the 10-year-old psychic, and rather than allow him on all the top-secret, dangerous missions he dreams of participating in, she relegates Raz to the intern program. Raz’s fellow interns give him a humiliating initiation, and he’s stripped of his clothes, locked in a closet, and forced to escape. Finding his way out, Forsythe assigns him to the Motherlobe’s mailroom. However, upon arriving, he finds that the manager in charge of the mailroom is trapped in a box marked for Zannato. Worse yet, the manager’s brain is missing. The only clue is a key found on his person inscribed with the name Lady Luctupos – a casino. The Psychoanuts deduce this is as good a place as any to begin their hunt for the mole.

Despite saving the head of the Psychonauts hardly a full day before the events of Psychonauts 2, Forsythe forbids Raz – and the other interns, for that matter – to join the Psychonauts on their mission. Instead, she teaches the group about mental connections. Effectively, this is a platforming puzzle where the player needs to connect two thought balloons to form a new idea, and one of the earliest examples of the game marrying its gameplay with its story. While inside Forsythe’s mind, Raz changes her mental connections, freeing her of worries and focusing her on making as much money as possible through gambling. At first, Forsythe’s mind is representative of a hospital, showcasing her earlier career as a medical professional before her superior stole and plagiarized her work. After Raz’s changes her mental state, however, the entire level transitions to a medical-themed casino.

Combat is also expanded in this section, allowing you to experiment with psychokinetic powers into melee fighting. Bad Ideas throw bombs, which you can pick up using telekinesis to throw around the map. Mental Connection – not too dissimilar from a grappling hook – allows you to zip across the arena and pull small enemies closer to you or vice versa for larger enemies. The combat is involved, though not as precise as you may want – especially when a lot is going on. Numerous times Raz would swing his fists in the wrong direction, even when I was trying to direct him towards an enemy, leaving himself vulnerable to attack. Even then, it’s fun to mix and match various powers to see how they affect foes and how you can turn the tides using a well-placed move.

Of the levels we saw in our preview, Forsythe’s brain is easily the most visually striking and interesting mechanically. On top of various platforming challenges, once the theme of her brain changes into a casino, Raz also participates in gambling challenges – such as a twisted take on Pachinko and a rigged race between a suite of cards. This is all in an effort to raise the “gazillion” dollars necessary to enter the High Rollers’ Club and gain access to Forsythe. It’s a fun way to break the pace of the game’s standard platforming – which again, isn’t always at precise as I wanted. Especially compared to Insomniac’s recent Ratchet and Clank: Rift Apart, which felt incredibly tight in most cases, Psychonauts 2 often feels clunky, and mistimed jumps or leaps in the wrong direction happen frequently. When the level starts introducing enemies into the platforming sections, it feels a bit messy.

Visually, the game is fantastic; worlds are a joy to look at. The story is very well-told and acted, and the music is great. From a presentation stand-point, I have little to complain about from my preview. But playing Psychonauts 2, can be tedious at times, or even laborious as I fought with the controls, trying to get it to do what I wanted.

The entrance to the Lady Luctopus Casino

This was most evident in my second demo world: Compton’s Cookoff. Suffering from acute anxiety issues, Psychonauts’ founding member Compton Poole’s mind is visualized through a cruel game show where contestants compete in a high-stakes gauntlet of various cooking challenges, all in an effort to feed three judges – the heads of the Psychonauts, represented as animal hand puppets. A fun – if gruesome – twist is the audience are all different foods, which you use to make each meal.

It’s a fun setup and an interesting way to visualize anxiety, exacerbated by the fact that each round has an ever-shortening time restriction. My problems with the game come back to the platforming never being as tight as I want; getting each ingredient to its designated spot, all while platforming over obstacles and dangers while trying to not let the clock run out, feels laborious after your second or third try because you accidentally missed a jump or threw your ingredient and it went in the wrong direction. There are three of these challenges, each harder and more complex than the last, and it’s a slog to get through. Luckily, time running out doesn’t reset your progress and only gates you from getting the reward at the end of each run.

The boss fight at the end doesn’t fare much better, if only because of unforgiving checkpoints. You’re tasked with fighting all three heads at once, avoiding the puke from their too-full bellies, all while helping Compton prepare meals that will further overstuff each puppet until it bursts. To up the ante, occasionally enemies appear on the platform while you avoid the bosses’ attacks. This all culminates in a multistage boss fight with a lot to keep track of. In and of itself, this isn’t bad. But if you die, you start all the way at the beginning of the fight, and it takes upwards of 10 minutes to make up your progress. God bless the game’s helpful invincibility mode, which got me through the fight when I was finally over it. (And for the record: God bless the game’s invincibility mode in general for helping people of all skill levels be able to enjoy a game at their comfort, and Double Fine’s commitment to accessibility. Get out of here with dumb gatekeeping, nerds. Let people play games how they want to play games.)

The last level I played, Cassie’s Collection, puts players in the mind of, well, Cassie, who is having self-control issues. Cassie’s mind is visualized as a library, where words and letters can be platforms and NPCs are hand-drawn storybook characters. The level is fun to explore and makes great use of verticality when trying to get from A to B. Cassie herself is split into three personas, each representing a different aspect of her identity – a writer, a counterfeiter, and a teacher – all of whom you help to take out the fourth and final version of Cassie, a librarian keeping all the personas separate and secluded. The majority of the level is composed of various fetch quests as you track down each persona and gather evidence to incriminate librarian Cassie, all culminating in a giant boss battle where you fight the librarian as she throws various projectiles your way and summons smaller enemies to hinder your progress.

By the time I played through Cassie’s Collection, a lot of my issues with the game were easier to ignore, but I think that’s because I got good at dealing with the frustrations. While I loved looking at each world and exploring their various nooks and crannies, after a while fighting with the game’s controls took its toll; I was less incentivized to go after harder-to-reach collectibles when I could tell it’d be a pain.

My frustrations haven’t turned me off from Psychonauts 2 completely; I’m still looking forward to playing the entire game when it’s released in August. I just hope that Double Fine can smooth some of the rough edges, bringing the gameplay closer to the fantastic worldbuilding