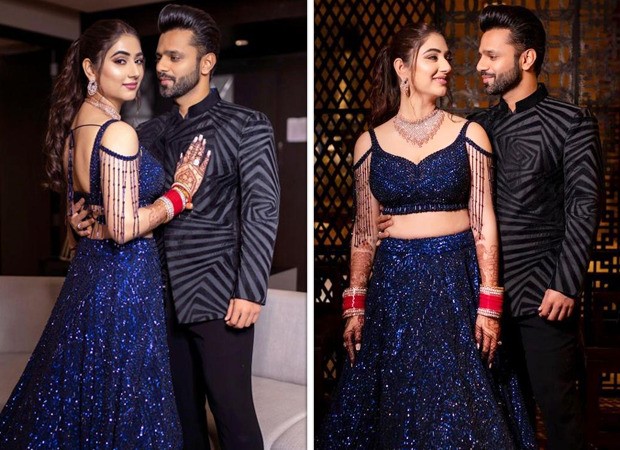 
Singer Rahul Vaidya and actor Disha Parmar have been basking in the wedding love and looked glam and bling for the special after party. The pictures and videos of the couple have been doing rounds on social media. Disha and Rahul looked exceptional during the celebrations. From giving us complete traditional looks, they both chose contemporary looks!

For after party, Disha was seen dressed in a beautiful royal blue lehenga from Nikaza Asian Cotute store with a sleeveless blouse and a fringe detail and beaded linings. Disha was seen in a beautiful blue flared lehenga with shiny and sequin details. She looks ethereal with shimmery makeup, heavy diamond jewellery. Her hair in a ponytail with a few stray strands framing her face.

Rahul was seen in a black suit. He’s seen in black high collar with grey embroidery and fitted trousers. He looks charming with a heavy stubble and a clean quiff. Rahul Vaidya wore Abu Jani and Sandeep Khosla.

The couple look great and they both make a stunning pair. They were both seen having a gala time at the party dancing their hearts out and being the perfect hosts and having the time of their lives at the wedding!

Rahul, a singer who rose to fame during the first season of Indian Idol, and Disha, an actor, have been dating for a few years. The singer proposed to her during an episode of Bigg Boss. After months of speculation, Disha finally arrived on the show and accepted his proposal.